Chapter 3 of the book “When Jesus Returns —what then?” by Jim Gibson. I have edited the text only where necessary, changed underlining to bold text and used the KJVER Bible version.

The term “rapture” does not appear anywhere in the Bible. This fact alone does not necessarily invalidate its truthfulness, however. The word itself refers to the “catching away” of the bride of Christ, which is the Church. According to the dispensationalists, the Church will be “taken” from the earth at the “coming” of Christ, otherwise known by its Greek name, the “Parousia”. This event would necessitate people being “left behind”. A seven-year period of great distress would follow and, would eventually end at the Second Advent of Christ. Thus, a “two-stage” coming of Jesus is required. 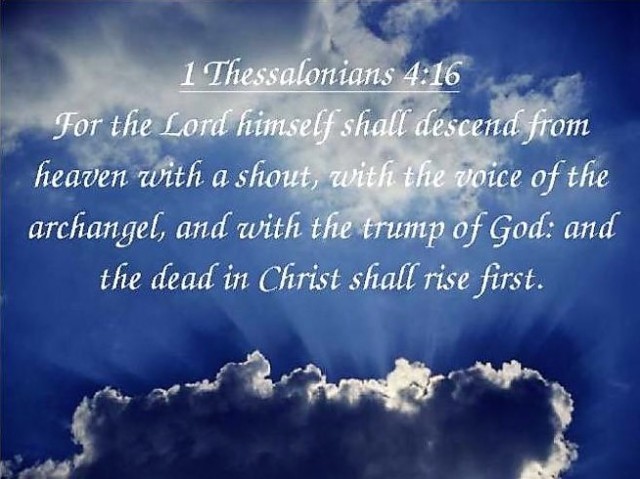 The word “rapture”, however, did not originate until the early part of the 1830’s when it was first coined by John Nelson Darby, the leader of the Brethren movement. This paper will not entertain the controversy of who was actually the first to expound the idea of a “two-stage” coming, whether Darby or a young Scottish woman by the name of Margaret Macdonald. Rather, I will only address the scriptural texts that have been cited in proof of this popular view referred to as the “rapture”. The most referenced biblical passage to support the “rapture” is from 1 Thessalonians.

“But I would not have you to be ignorant [unaware], brethren, concerning them which are asleep [dead], that you sorrow not, even as others which have no hope. For if we believe that Jesus died and rose again, even so them also which sleep [die] in Jesus will God bring with Him. For this we say to you by the word of the Lord, that we which are alive and remain to the coming of the Lord shall not prevent [precede] them which are asleep [dead]. For the Lord Himself shall descend from heaven with a shout, with the voice of the archangel, and with the trump of God: and the dead in Christ shall rise first; Then we which are alive and remain shall be caught up together with them in the clouds, to meet the Lord in the air: and so shall we ever be with the Lord. Wherefore comfort [encourage] one another with these words. But of the times and the seasons [dates], brethren, you have no need that I write to you. For yourselves know perfectly [full well] that the day of the Lord so comes as a thief in the night. For when they shall say, Peace and safety; then sudden destruction comes upon them, as travail [birth pains] upon a woman with child; and they shall not escape. But you, brethren, are not in darkness, that that day should overtake [surprise] you as a thief… For God has not appointed us to wrath, but to obtain salvation by our Lord Jesus Christ.” (1 Thessalonians 4:13-18; 5:1-4,9)

Let the reader be aware that I have intentionally omitted the paragraph division, so as not to interrupt Paul’s thought (Paul didn’t have paragraph divisions in his letter either). Paul, in verse 13, tells the Thessalonians that they should not fret or worry about “them which are asleep”. He then begins to outline to them the sequence of events which were to transpire at Jesus’ return. In verse 14, he comforts those who had loved ones, which had previously died, by explaining that God will bring them back with Jesus at his return.

In the next verse, Paul says that what he is teaching them is based on the authority of the “word of the Lord”. In other words, he received this knowledge by direct revelation from Jesus. Next, he states that those Christians who are alive at Jesus’ “coming” (Parousia), will not “prevent”, that is, precede them which are “asleep” in Christ. By comparing this thought with 1 Corinthians 15:51&52, we can get a better understanding of what Paul meant by his usage of the word precede.

“Behold, I show you a mystery [secret]; We shall not all sleep, but we shall all be changed. In a moment, in the twinkling of an eye, at the last trump: for the trumpet shall sound, and the dead shall be raised incorruptible, and we shall be changed.” (1 Corinthians 15:51,52)

It becomes evident that these two verses in 1 Corinthians actually mirror Paul’s teaching here in the 1 Thessalonians passage.

Let’s consider for a moment the last clause in verse 16, “the dead in Christ shall rise first”. According to Thayer’s Lexicon, the word rise means to “cause to appear, bring forward”. Therefore, the picture being framed for us is not one in which the dead are raised from literal graves first, but rather, that the “dead in Christ” who are in heaven with their Lord shall receive their immortal bodies first. Then, with their resurrected bodies, the dead will return with Jesus to meet those Christians who are still alive. Then, those believers who are alive will be “changed”, that is, they will receive their resurrected bodies also as they are being “caught up” to be with the Lord. The phrase “caught up” is where the dispensationalists derive the term rapture.

After Paul gave comforting words to the Corinthians concerning their loved ones, he then redirects the discussion back to Jesus’ second coming. Paul refers to this event as the “day of the Lord”. If you carefully study what Paul is teaching in the entire section of chapters 4 and 5, then it becomes obvious that only one event is under consideration, namely, the Second Coming. Paul uses the terms “coming” (Parousia) and “day of the Lord” interchangeably. Again, judgment in the form of “sudden destruction” or “wrath” to the ungodly but, “salvation” (vs.9) to the saints are the overriding thoughts in these words of Paul.

“After this I looked, and, behold, a door was opened in heaven: and the first voice which I heard was as it were of a trumpet talking with me; which said, Come up here, and I will show you things which must be hereafter.” (Revelation 4:1)

Remarkably, there are those who maintain that the phrase, “come up hither”, symbolizes the rapture of the Church and, all subsequent visions relate to those events between the “rapture” and the “second coming” (the seven-year period of the antichrist). Of course, I am referring to the dispensationalist. This is a forced interpretation and extremely tenuous, to say the least, since it violates all known rules of hermeneutics (rules of interpreting scripture).

Download PDF of the whole book: When Jesus Returns–what then? by Jim Gibson

Dr John G. Hartnett is an Australian physicist and cosmologist, and a Christian with a biblical creationist worldview. He received a B.Sc. (Hons) and Ph.D. (with distinction) in Physics from The University of Western Australia, W.A., Australia. He was an Australian Research Council (ARC) Discovery Outstanding Researcher Award (DORA) fellow at the University of Adelaide, with rank of Associate Professor. Now he is retired. He has published more than 200 papers in scientific journals, book chapters and conference proceedings.
View all posts by John Gideon Hartnett →
This entry was posted in Bible prophecy, Biblical doctrines and tagged Jesus Christ, Rapture, second coming, the day of the Lord, the last day, the resurrection, the second coming of Jesus. Bookmark the permalink.
%d bloggers like this: